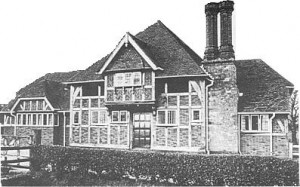 Many visitors to Rotherwick are intrigued by the size and appearance of this village hall, which was built in 1932 as a memorial to a young American.
In the 1920’s, when Sir Herbert Cayser was the owner of Tylney Hall, Rotherwick, he spent two months of each year at his estate in Scotland. During these vacations he arranged that Tylney Hall should be let for the shooting. For several successive years, the tenants on these occasions were Mr. and Mrs. Henry De Forest and their son and daughter, from Cold Spring Harbor, Long Island, New York. The family expressed their immense pleasure at this arrangement to Sir Herbert Cayser, and they took a lively interest in Rotherwick and the Church. Friendships developed with local people who were entertained at Tylney Hall together with friends and visitors from the USA.

In 1929, at the conclusion of one of these family vacations, Charles De Forest parted from his parents after morning service at Rotherwick Church, and motored to Southampton to embark on a world cruise. He was 24 years old, and had graduated from Harvard University. A short time later, having returned to their home at Long Island Mr and Mrs. De Forest received the shattering news of their son’s untimely death from fever while he had been staying in Italy.

In August 1930 Henry De Forest wrote to the Church wardens at Rotherwick. The letter expressed the wish that because of the family’s special and personal connection with the village, something useful and permanent should be given to the people of Rotherwick. The letter went on to suggest that a new Village Hall might be considered as a memorial to their son, provided that the gift could be accomplished with the full and cordial approval of the village, including members of the committee of management of the existing Village Hall.

At that time the premises which were used for local meetings and village functions consisted of a Nissen hut situated on the south side of The Street, opposite the site of the present hall. It was regarded by many as a temporary building and architecturally it was not an asset to the village. Consultations took place between the Church wardens and the Management Committee of the old hall, and eventually a Public Meeting was called in May 1931 which was very well attended. This Meeting resolved to accept the magnificent and generous offer of the new hall, and the Churchwardens were asked to convey to Mr. and Mrs. De Forest the grateful thanks of the people of Rotherwick.

The principle condition of the gift was that the Rector and Church wardens should be constituted as the Trustees of the new Village Hall, with power to depute the management to a committee to be elected annually at an open meeting for all parishioners, providing that the said Trustees, should they deem it advisable, could resume absolute control at any time.

It was also suggested by the donors, that the building should be situated in the same street as the Church, and that the style of the architecture should be simple and in harmony with the older houses in the vicinity. It was the wish of Mr. and Mrs. De Forest that the hall and surroundings should be adequate for present and future requirements, and that the site should be enhanced by the planting of trees, lawns and hedges. They also emphasized that in recognition of their son’s association with the young people of the village, one of the prime uses of the hall should be as a meeting place for the children resident in or near the parish, and the holding of entertainments of any suitable kind for their benefit.

Mr. Wills Chandler, of Basingstoke, was engaged as Solicitor, and in July 1931 he began negotiations for the purchase of a plot of freehold land from Hartley Wintney Rural District Council for £100; the purchase was completed in November 1931. The Declaration of Trust was completed on 19 December 1931, naming the first Trustees of the Rotherwick Village Hall Charity as Reverend Gilbert Stapleton M.A. (Rector), Dr. Mark Avent and Lt. Col. Edward Walter Comyn, C.M.G., D.S.O (Churchwardens). The Title Deeds were vested in the Official Trustees of Charity Lands (Charity Commissioners) thus obviating the necessity of legal processes and fees whenever individual trustees retire for any reason.

The task of designing and planning the new hall was given to Mr. Thomas Greenfield A.R.I.B.A of Midhurst, who was chosen because of his previous experience of cottage architecture. There followed many discussions between the Church wardens and the architect, with frequent references to Mr. and Mrs. De Forest, in an endeavour to produce a building which would serve the needs of all sections and ages of the community for a variety of functions, both public and private. Mr. Greenfield’s first plans and specifications were submitted in August 1931. The donors were particularly concerned about the height of the ceiling in the main hall, both from the point of view of appearance and also acoustics, and the ceiling was eventually raised to seventeen feet. They were also anxious that the exterior oak timbers should be hand-adzed, and that the bricks used should be the same pinkish colour as those of nearby timber-framed cottages; the plans were finally approved in December 1931.

The builders were Messrs Musselwhite and Son of Basingstoke, who commenced work on the construction in January 1932, and because of good weather conditions, were able to proceed unhindered. The bricks were made at their brickyard at Newnham, which employed several men from Rotherwick. The roof was completed within six months. A team of Italian craftsmen was employed to lay the sprung oak floor of the main hall. At the time of construction the village was without a public supply of electricity or gas, so a generating plant was installed by the Hayden Oil Company. Both this and the Oil-o-matic boiler which supplied the central heating were housed in the engine room below the kitchen. There was a solid fuel cooking range in the kitchen for catering purposes.

A Projection Room was built on the first floor, situated immediately above the entrance lobby. This was reached by a separated doorway and stairs. Because of Home Office regulations regarding cinematograph apparatus a slight alteration was necessary to the original plans for the south elevation, whereby the top two panels on each side of the middle portion were left open.

Mr. and Mrs. De Forest requested that a small and inconspicuous tablet should be placed inside the main hall to indicate that the building was given by them in memory of their son. Eventually this took the form of an oak plaque which was designed by Mrs. De Forest’s brother. The wording, as specified by the family, reads as follows:

The plaque is fixed on the south wall above the swing doors.

At the suggestion of Mr. Wills Chandler a large car park was provided flanking the east side of the building; this was a very foresighted decision in 1932. The ground on the west side of the hall was turfed; at first it was thought it would be used as a bowling green, but because of the high cost of such a venture and the lack of support locally, the idea was discarded. The site was enclosed by a holly hedge at the front and a whitethorn hedge along the remaining three boundaries, to give protection against cattle, and to form a suitable background for the flowering trees which were planted at the north end of the site. In July of that year it was observed that a pair of housemartins had taken up residence under the eaves on the south wall.

By October 1932 the hall was completed and ready for use. The accommodation consisted of an entrance lobby with cloak-rooms on either side: a main hall 60 feet by 30 feet; a stage 16 feet by 23 feet with two dressing-rooms and lavatories: a committee or games room 19 feet by 24 feet: 2 emergency exits: seating accommodation for 250 people: a kitchen and serving area; the wood used throughout the building was mainly oak. Behind the hall is a cycle shed, which was much used in those days.

The official opening ceremony was performed by Sir Herbert Cayser, Bart. M.P. on Saturday October 15th 1932, in the presence of a large audience of parishioners. In the course of his speech Sir Herbert said that it was difficult to find words to express the appreciation and gratitude which the people of Rotherwick felt towards Mr. and Mrs. De Forest for this truly wonderful gift. He went on to pay tribute to the Church wardens who had shouldered the immense responsibility and work involved in carrying out the wishes of the donors, and had acceptedd the anxieties and problems which are inevitable in a project of such magnitude when the distances are so great. Over 40 letters, telegrams, plans and legal documents had passed between them and Mr. De Forest, in addition to the day-to-day discussions with the solicitor, architect and builders.

The cost of the hall including land, planting and surfacing of the plot, construction, furnishing and equipment, together with professional fees, totalled £8,000. Mr. and Mrs. De Forest were anxious that the future upkeep of the hall should not become a burden to the people of Rotherwick, and between 1932 – 34 they donated a further sum of £2,000 as an endowment. This was invested in 3 1/2% War Loan Stock, and the income made available to the Management Committee.

In August 1933 Mr. and Mrs. De Forest visited Rotherwick privately to see for themselves this impressive memorial to their son.